Steinar Mølster lives at Nakka, a farm in Voss munic­ipality to which there is no road. In connection with another project on the farm, we got a chance to see Steinar’s grandfather’s old broadaxe. The broadaxe has a handle that is crooked in relation to the cutting blade. This is a type of broadaxe that we see on farms in Hordaland, though it is not the most common type of broadaxe in the area. The most common type of broadaxe has a straight handle. Att­empts to explain these crooked handles have generally resulted in a number of rather odd theories. Steinar watched his grandfather us­ing this broadaxe when he was young, and that was the background for this proje­ct. We wanted to tr­y this technique ­in practice on the basis of what Steinar could remember.

Norwegian Crafts Development (NHU) agreed to fund the hourly expenses, and Hordaland County Authority (HCA) paid to have a copy of the broadaxe made. Blacksmith Øystein Myhre took on the job of making the copy in his workshop. The forging process was as close to the original as possible, and the res­ult was a great broadaxe that felt very like the original during trial use.

The participants in the project were Steinar Mølster as the carrier of the tradition, Emil Thoresen Småland from HCA as apprentice joiner and Trond Oalann from HCA as foreman. The first thing to be done was to fell trees. They were to be used for new protective timbers (svilar) for the roof of the smoke­house on the farm. We cut down trees using an axe and crosscut saw, and pulled the tim­ber manually using grabber chains.

Felling with a crosscut saw: Steinar has a great deal of experience of this type of felling. 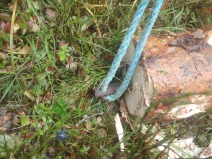 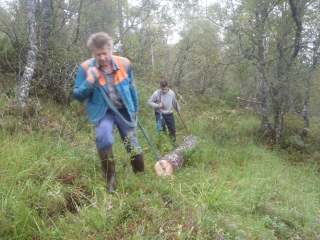 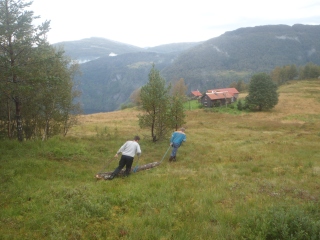 Hanging on the wall of the sitting room at Nakka is a picture painted by Steinar’s cousin just before the w­ar. The picture is of the farmyard, but it also shows the trestles Steinar’s grand­father used when he hewed logs for the barn.

When the trestles had been set up, we lifted a log onto them and used a chalk-covered piece of string to mark the centreline. We tried using Sjur Bergstad’s string, with white chalk on it so we could make a mark on the bark as Sjur would have done. Sjur would have used a big­ger piece of harder chalk.

The first step in the actual working of the log is something called klamphogging or laskhogging, which in practice involves notching and splitting the log in 30-40 cm sections (from the cambium). This used to be done using an axe, but Sjur had a good bow-saw that he used for this. Only where the log was thinnest did he use an axe to notch it. Sjur carried out this work alone while the others on the farm were busy haymaking. Knut Øvstedal, who lives at the other side of Evangervatnet lake often saw logs being hewed when he was young. 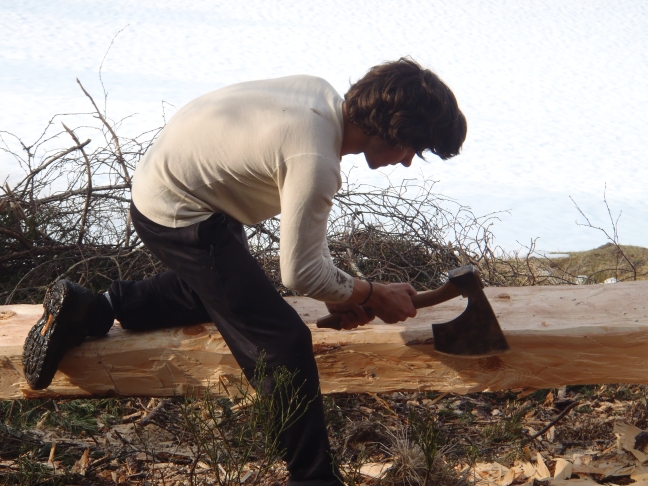 In Øvstedal, a broadaxe with an ordinary straight handle was used and the workers stood astride the log. The interesting thing about the working method Knut described was that two men worked together on the log. 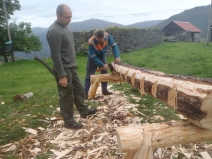 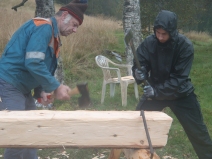 Knut said that the work process was very common. Laskhogging took place by two men chipping the same notch alternately, positioning the log so that the notch was plumb. When they split the sections between the notches, they used a powerful broadaxe and a big mallet they called a husklubbe. One man held the broadaxe against the section to be split and the other one struck the neck of the broadaxe with the mallet. When the sections had been split using this method, both of the men started hewing the lo­g smooth with their broadaxes.

One man started at the bottom and one in the middle­. We know that this technique of two men standing notching and splitting logs was common elsewhere in Norway, and indeed in Europe.

We have used the method that Knut described to us, and it has proven to be a good working method. Working together in this way mean­t that the work was relatively easy and you could vary your work position frequent­ly. However, it is rather difficult to really get the hang of this two-man method of notching and splitting when the log is in such a low position. It is easy to strike the ground and you feel like going onto your knees to avoid having to bend over so much. Knut showed us a technique, however, where you could stand up pretty straight, but a lot of training was required to master the technique. On the other hand, this two-man method of notching and splitting proved very effective and a favourable working method when the log was at the right height for using Sjur Bergstad’s crooked-handled broadaxe. We tested this method briefly. Given that this is a very common way of notching and splitting timber, it is reasonable to assume that this working method was also employed when crooked-handled broadaxes were used. 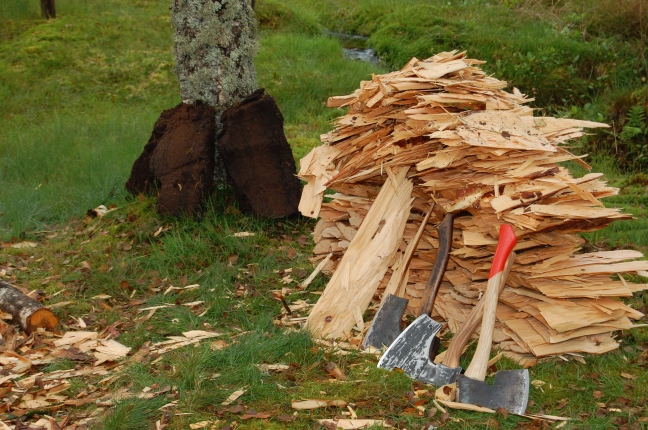 The pieces of split wood were not wasted, they were used for firewood. We stacked them in a pile with the biggest chips. We got a good pile of firewood from these two small logs alone. The sections are split approximately half an inch from the line. Sjur would have used the same little broadaxe for this work as he would have for the notching­.

When we commenced the actual smooth hewing, the broadaxe with the crooked handle was used. This was a different experience altogether from using the straight-handled broadaxe on a low log – it was now possible to stand upright with your back straight. You also felt that you could work for a long time using this technique without your back aching. One dis­advantage is that you are at greater risk of striking your leg, and you could be unlucky and cut yourself

even higher up. This risk should not be exaggerated though, the work method itself is based on steady and controlled ­move­ments. It is important to find the right rhythm and a working method that does not put too much strain on the bo­d­y, so that you can keep on working day after day. Steinar believes that it is important to keep your arms close to your body to minimise the strain on your­ shoulder­s.

When you are chopping against the grain with an ordinary broadaxe, you simply turn your whole body, which is easy when you are astride the log. However, with a broadaxe with a crooked handle, you have to stand on the same side the whole time. This was not a problem in relation to the small areas of crossgrain that we found in these log­s. It was just a case of tilting the handle backwards and hewing your way forward, as shown in the photo.

What this would be like if you had a log with large areas of crossgrain I do not know – you would have to try it and see. But there are broadaxes whose handles tilt the other way – whether they are for left-handed people or for logs that twist to the left, I do not kn­ow. But I am sure a right-handed broadaxe is fine in most cases. In special cases you may want to use a broadaxe with a straight handle on a low-lying log instead. So the broadaxes with the handle tilting the other way are probably for left-­handed people.

On assignment for Hor­daland County Authority represented by the Building Preservation Department and Carpenter Trond Oalann, I, blacksmith Øystein Myhre, have forged a copy of the Hordabile broadaxe. The original broadaxe has been in my forge on voluntary loan from the private owner.

That broadaxe was forged to curve to the right in relation to the handle, so that the existing handle on the original broadaxe is flush with the outer side of the axe blade­.

After careful investigation, I chose to start with the shoulder of the axe and the shaft hole, hammered in one piece from a piece of steel 25x75mm.The steel was hammered flat to 90x35mm, then split and punched into the original shaft hole.

Under the shaft hole, I welded a piece of steel of 15x100x120mm, and then the middle piece was hammered to a length of 220mm­. I then removed 40x220mm of the lower part of the broadaxe.

The axe was normalised twice and hardened at 800 degrees in hot rapeseed oil, then exposed to 240 degrees Centigrade for 2×1 hour. It was then sharpened, honed, hafted and tried out.

The crooked-handled broadaxes that are found on farms across Hordaland are specialised tools for hewing smooth timber. They are specialised to perform a specific task to a greater extent than the broadaxes with straight handles that are more ­versatile in use. The combination of using broadaxes with crooked handles and positioning the logs being worked on higher up­ was ideal for notching and splitting (laskhogging, ornibbhogging as it is also called). The use of these broadaxes is very similar to the use of single-beveled broadaxes with crooked handles. The marks that such crooked-handled broadaxes leave on the logs are very similar to the marks left by straight-handled broadaxes on a low log. It should, therefore, be no problem to use this working method in connection with e.g. the restoration of Bryggen in Bergen or similar buildings. This broadaxe opens for a variety of work positions and can therefore be used as an HSE measure. In such case, wearing protective trousers of thick leather etc. should be considered. The trousers do not have to have an iron lining, two layers of thick leather will probably be enough to limit the extent of any injuries should you sustain a ‘light’ cut from the broadaxe. The working rhythm and working position are the most important measures for ensuring safe work with the axe. It is probably the actual notching and splitting that presents the biggest risk, as the axe is then in vigorous movement. The technique of laying the log such that the notch is horizontal is probably safest.

Trond Oalann for NHU and HCA